As a matter of fact, I wasn’t interested in bagels when I was in Japan.

However, after I moved to Los Angeles, I tasted bagels and decide that I like them.

Sometimes, I have a real craving for a bagel.

On those occasions, I always go to the same bagel shop.

This time I would like to introduce the bagel shop which serves the best bagels in Los Angeles, I think 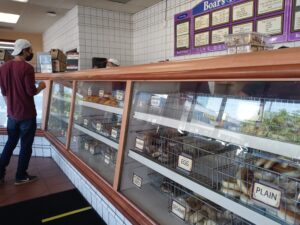 The history of the bagel

Do you know where was created and how to bake it?

The first bagel was produced in Jewish communities in a city called Krakow in Poland in about 1610.

In the beginning, bagels were the food that was given as a gift for women in childbirth.

The word “Bagel” is from Yiddish and the meaning is “ring” or ” bracelet”.

Then it became popular as a traditional food in Poland.

In the 19th century, bagels were brought to the U.S. by immigrant Polish Jews who opened bagel businesses in New York City.

One of the popular bagel eating styles for Jewish people is to serve with “Lox,” which was also developed in the 19th century.

“Lox” means a fillet of brined and smoked salmon in Yiddish.  It is usually served with cream cheese and tomato.

The way to make bagels is very simple.

A bagel is made from yeasted wheat and formed like a ring.

After it is fermented, it is then boiled for a few minutes in the hot water.  Then it is baked in the oven.

Traditional bagels are sprinkled with poppy seed or sesame seeds.

So, it is boiled and baked and that’s why it is crunchy outside and chewy inside.

The bagel is a unique food don’t you think?

Also, the reason for the ring shape is easy to hang at the stores and easy to carry. 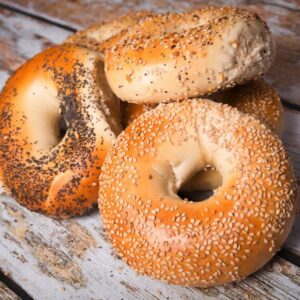 This shape is derived from the early bagels.

It is an interesting history isn’t it?

Bagel are famous not only in New York City but also in Los Angeles.

My husband is Jewish so he is particular about bagels and he always goes to one place to buy bagels.

It is called “Western Bagel”. 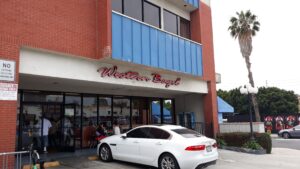 In the 20th century, a man called Louis Ustin came to the U.S. to escape from the Russian Revolution.

He settled with his family in the Bronx, New York where he worked as a bagel baker for a while.

Eventually, he opened his bagel shop in the Bronx.

One day, he heard that there is no tasty bagel shop in California.

He moved to Los Angeles and opened the first shop in 1947.

He noticed that the tastes of the west coast were different from the East coast.

So he developed a bagel that was softer and chewier than the typically dense and harder East coast style.

They are always busy on the weekend and we normally have to wait in line.

People waiting on the line means a tasty sign.

It’s the same everywhere in the world.

There are many kinds of bagels. So it is hard to make a decision 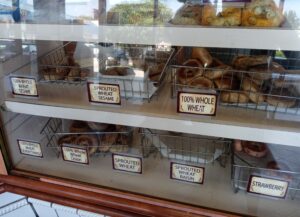 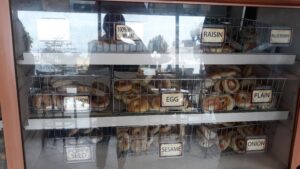 My husband and I always order the same bagel, “Lox with cream cheese”.

Of course, ask to warm up as well

Not only is the bagel tasty, but also it is easy on the wallet

I went to several bagels shops before, but somehow the taste is much different and not tasty, at those other places.

Always the same taste and so good at Western Bagel.

It is just bagel, but it is still a big deal

If you want to taste a bagel in Los Angeles, I will highly recommend going to this place!

Now we cannot eat inside the shop, but there are three tables outside. (West Los Angeles shop on Santa Monica Blvd.)

So you can eat outside.