After we visited Buffalo, New York, to see Niagara Falls on June 30, we drove east towards Cape Cod, Massachusetts, which I wanted to see for a long time. This day we drove 515 miles, about nine hours driving included the resting time. We used Interstate 90,495 and 6. Cape Cod is like a peninsula that is about 70 miles from Boston. 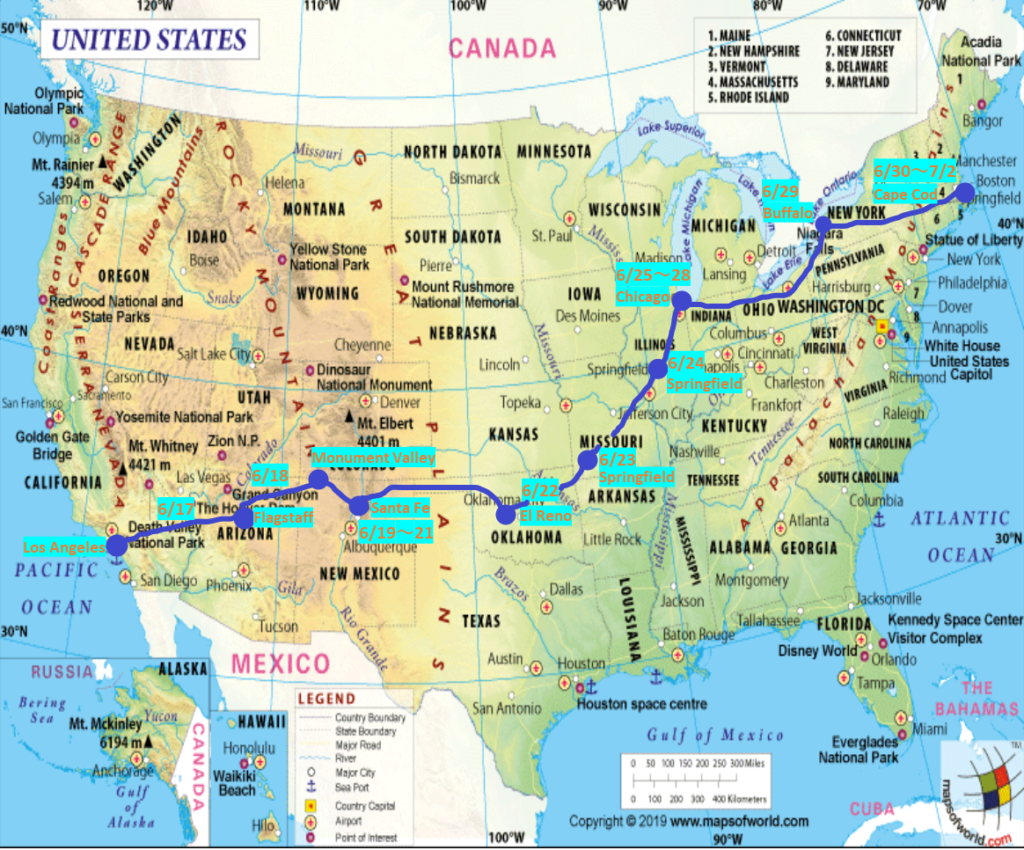 This place is famous because there is a summer house of the Kennedy family. I have been interested in Jackie Kennedy’s life, and I read several books about her.  So I wanted to see with my own eyes Cape Cod, where she had spent many years. Then my dream came true.

As we were getting closer to the middle of Cape Cod, many trees, canals, and old houses were everywhere. It completely changed the view from Chicago. 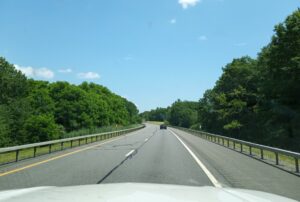 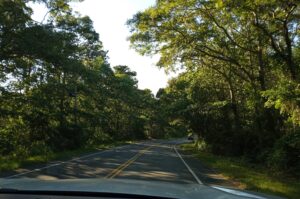 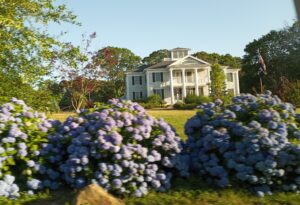 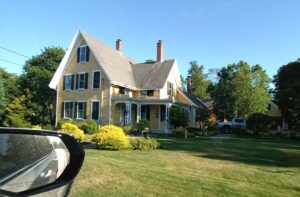 Well, there are many small towns in Cape Cod. Unfortunately, we couldn’t visit all of these towns, but I would like to introduce some.

Hyannis Port is famous because the Kennedy family’s summer house is there. We visited the museum—many explanations of Kennedy’s family background and many pictures of JFK and his wife, Jacqueline Kennedy. Most of the photographs were rare which were taken in private time for the Kennedy family.  Also, we could watch a short film about the Kennedy family and this town. 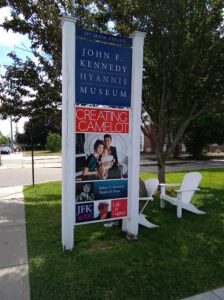 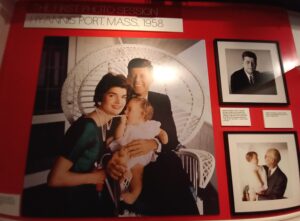 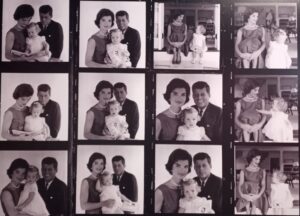 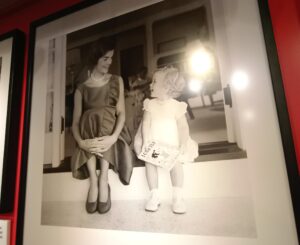 I thought that Hyannis port was a more popular place. However, it was a small town and a few restaurants and souvenir shops. So it was a bit disappointing for me. 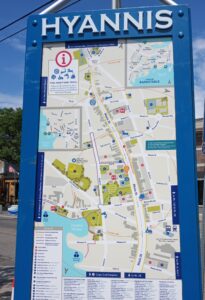 The specific information about this museum（Reservation is required due to the covid-19.）

There are a bunch of beaches on Cape Cod. We chose a beach called Mayflower Beach, which was close to our hotel. This beach is on the Cape Cod Bayside (not the Atlantic side). The water was clear, shallow, and quiet. There is a parking lot (not gratis), shower, bathing room, and a small kiosk 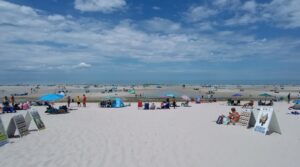 We visited another beach called Race Point Beach, near the northernmost town of Province town, on the Atlantic side. On that day, the weather was rainy and windy. So the beach was closed. I was surprised that I saw a warning sign for sharks. 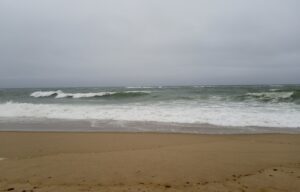 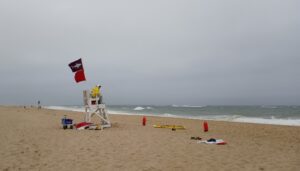 The northernmost town is called Province town, P-town for short. It is one of the most touristy places on Cape Cod. There are many souvenir shops, art galleries and restaurants there. Also, it is famous for gay people, especially gay guys. I was so surprised that I’ve never seen a place where most of the tourists were gay couples. 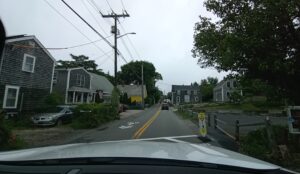 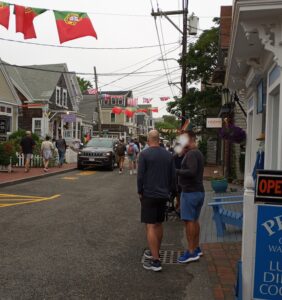 There are many shops on the main street. So, you can enjoy window shopping. 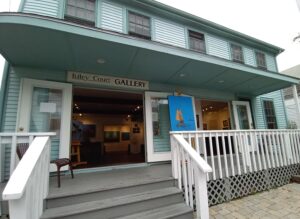 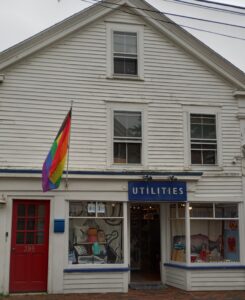 The specialty in Cape Cod is Lobster from anyone’s point of view. Unfortunately, we rarely eat Lobster in Los Angeles because the price is high. So  I ate Lobster three days in a row.

I want to introduce some excellent restaurants which we visited in Cape Cod this time.

This restaurant was suggested by guys who we met at Mayflower beach. The restaurant has a cozy patio with a nice view on from the back.  We sat there, but unfortunately, when we were eating a meal, the weather was getting rainy.  So we moved to an inside table. 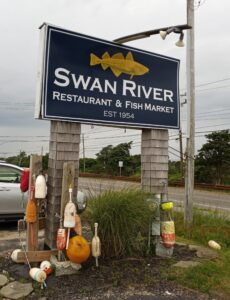 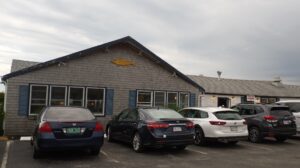 I think this place is the best in Cape Cod on our trip because the lobster was fresh and tasty. Also, the price was about one-third of the cost in Los Angeles. The lobster was sweet and so plump! That was the best texture I’ve ever had. If I have a chance to visit Cape Cod in the future, I want to go back to this place.

We also ordered Little Neck Clams, which are caught around here. This clam is much bigger than average, and it has a protruding appendage. The clam was fresh and delicious as well. This went with white wine. 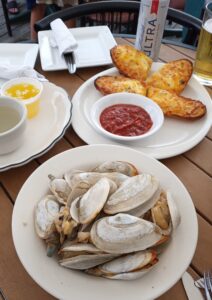 We ordered a key lime pie for dessert without any hesitation. This pie was the right size and sweet. Thus, we were satisfied with our meal at this restaurant.

The specific information about this restaurant. (Reservation required)

A friend of mine suggested that I visit here to taste a lobster roll. The specialty is Lobster Roll. I heard this place is so popular, so we went there around 5 pm. Surprisingly, already over 30 people were standing in the line! 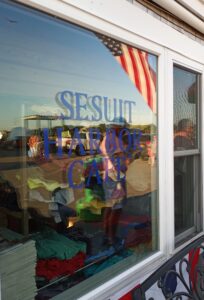 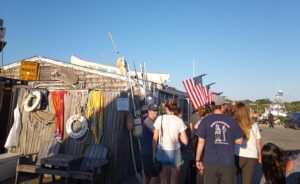 At this restaurant, the customer orders in advance at the cashier. And they don’t serve any alcohol or beverage as well. So we had to carry something to drink to the table.

We waited about 30 minutes to order then another 30 minutes to get our food. This restaurant has a vast space with big tables in the back. So we could share the tables with other guests.

We ordered fried clams and Lobster Roll with coleslaw and French fries. The clam dish was quite a big size so we couldn’t eat the whole of it. Also, I like steamed clams rather than the fried clams.

And the lobster which I wanted to taste was so delicious! As I expected, the roll with plenty of fresh lobster and I was delighted. This lobster roll was the best so far. I want to go back to this place.

The specific information about this restaurant. (Reservation not required.)

My friend suggested this place. This restaurant is very famous for tourists. Luckily, we went there 10 minutes before the opening so we could sit immediately. However, when we were leaving, we found more than 30 people were waiting in line. So it is better to go there before the restaurant opens. 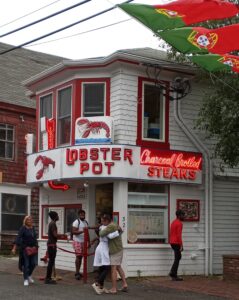 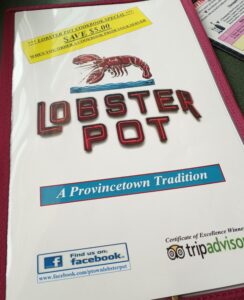 This restaurant’s specialty is lobster as their name. We had a great breakfast at the hotel, so we didn’t feel very hungry. So we just ordered clam chowder soup and lobster bisque soup for lunch. Especially the bisque was so tasty with a thick stock from the lobster. I want to visit and taste the whole lobster next time. 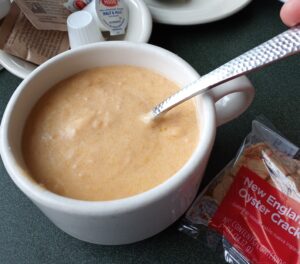 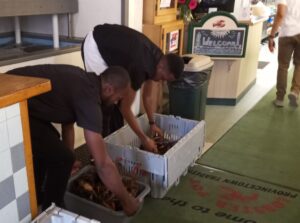 The specific information of this restaurant.

One of my friends suggested a couple of B&Bs. Unfortunately, the summer season and Independence Day were happening soon, so I couldn’t find any rooms for a B&B in Cape Cod. So I searched over and over, and then finally, I found a friendly B&B called Isaiah Hall Inn. I reserved three nights. This hotel’s owner, Jerry, used to work for Kodak. Then after he retired, he bought this house and renovated it, and then opened it as a B&B hotel 17 years ago. This original farmhouse was built in 1857. 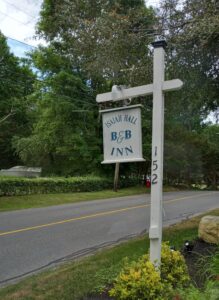 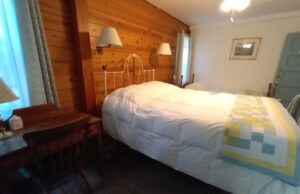 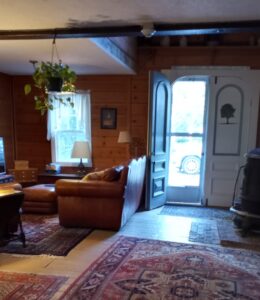 This hotel has a great backyard with trees and flowers. We can have breakfast on the patio. We enjoyed the great breakfast with this fantastic view.

The owner of this hotel, Jerry, is such a friendly and sweet person. He made a fabulous breakfast every morning. For example, he served a Belgian waffle on the second day and the third day omelet with bread pudding. And the last day, one of his friend’s granddaughters made a delicious ricotta French toast. We were tired of having a ready-made breakfast at the business hotels during this road trip, so we enjoyed these tasty breakfasts. 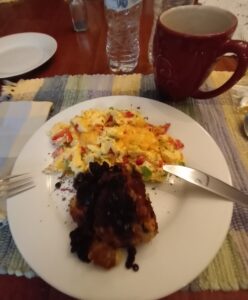 I love this kind of B&B because we can feel a cozy atmosphere. We made a conversation with other guests and exchanged information about Cape Cod. I was surprised that most of the guests were regular members. One of the customers has been staying in every summertime for 17 years! The owner, Jerry, probably attracted them, so I think the guests want to return to that place. If I can visit Cape Cod, I want to stay at Isiah Hall Inn again!

After we enjoyed Cape Cod, we started driving towards New Jersey to see my husband’s family and relatives.