Drive to Big Sur with feeling the nature

Well, I am going to write about the road trip to Monterey same as last time.

We drove to Monterey which was the final destination, after visiting Hearst Castle.

San Simeon and Carmel as you drive north.

The distance about 71 miles.

The origin of the name of “Big Sur”

“the big country of the south”.

It refers to the region south of the city of Monterey.

the coastal hills and valleys.

We could see the fabulous scenery and the Pacific ocean along this undeveloped coastline.

There were so many great spots to take pictures!

This California State Route 1 has another name, the “Cabrillo Hwy”, and it was built in 1937.

On this highway, there was a landslide as many as 55 times

There was a very big landslide May a year ago, and the highway was closed until

with cows grazing on the right side!

These views made me feel that the US is a big country. 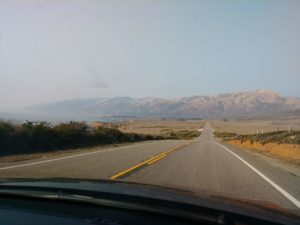 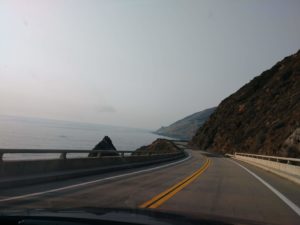 The following photo is the place which had the landslide last year.

The road is still under construction. However, it is mostly repaired. Notice the lack of plants on

the hillside which was re-shaped by construction crews.

While we were driving north, we saw some wild animals such as wild Sea Otters which we also saw

on the first day at Morro Bay.

At first, we stopped at “Elephant Seal Vista Point” which we can see many Elephant Seals.

When I looked toward the beach, I found there were many fat Elephant Seals

These fat seals were rolling around and some were getting on top the others. It was funny.

Also, we could see some cute baby seals!

And the next, we saw some wild turkeys!

My husband said,” Look that! They are wild turkeys!” then he stopped the car.

Cars were coming and going and filled with the roadway.  But drivers drove carefully and the turkeys

crossed the road and then walked quickly away.

Then they walked up the hill and into the bush which probably their home.

We laughed at this scenery.

After we spent a night in Monterey, we visited a European-style small beach town “Capitola”

I wanted to go there for a long time.

After we left Monterey and we headed up 40 miles, about 1-hour drive.

While we were driving, we found a huge green field from the car.

Watched closer, that was artichoke farm!

We could look all over the place with green Artichoke farm!

Yes, this area surrounding Monterey produces a huge amount of fruits vegetables and so on.

Especially, the place which we drove by called Castroville.  It is a famous area for Artichokes.

It is difficult to find and buy in Japan.  About 75% of the total Artichoke crop is produced in California!

So we can buy in supermarkets for almost the whole year.

I found on the internet, Artichokes can be sold during the whole year.  But the best season is

from March to May.

I have never seen these before so I found something new 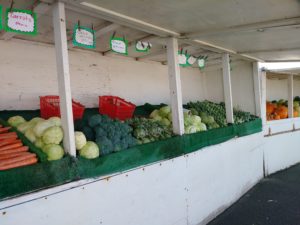 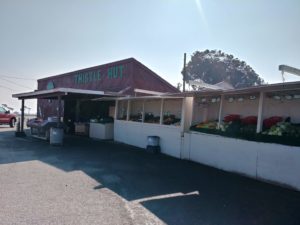 Here is a related topic.

The best way of eating Artichoke

② Peel leaves one by one, and the dip in olive oil with salt.

This is the best way and tasty to eat Artichoke, I think.

My husband likes to dip with melted butter, but my favorite is olive oil with salt!

And peel all leaves then the heart of Artichoke, this is the tastiest part of it.

Let’s return to the main subject.

We got to a small beach town called “Capitola” after about one hour drive.

There are some colorful houses on the beach and just like a European atmosphere.

Many years ago, Capitola was called Soquel Landing.  It had a wharf which was used to

deliver lumber and crops to other places from here.

In 1869, Frederick A. Hihn, who came from Germany in Gold Rush period owned this property.

Then he decided to develop it as a seaside resort.

Also, the “Capitola” name for this oldest beach resort on the West Coast is from the famous novel

This small beach town is a very convenient place. Because boutiques and restaurants are

concentrated near the beach.

So we can go anywhere without driving a car or needing a bus.

And there is a public parking near the beach as well.

Also, we can walk on the pier and watch the ocean,

We walked near the beach for a while.

we could see the colorful houses along the beach.

Those are my favorite tastes.

I had a little nibble from his plate. Haha

Thus our road trip along the California Coast was over.

We had a great time in Cambria and Monterey!

In the end, I want to post a cute doggy which we saw in Capitola.