Well, this time, I would like to introduce a charming town in California called “Julian”

By the way, where is Julian?  About 50 miles northeast of San Diego.

The red point is Julian.

So you can easily stop at this place before you visit San Diego.

Julian is located in mixed pine-oak woodland at 4,235 feet above sea level.

So it is a popular place as a mountain retreat, just an hour from San Diego by car.

In winter, especially January to March, snow falls an average of 6.7 inches and the lowest temperature

The history of Julian

This town is famous for its gold rush.

Julian began as a mining camp when A. E. Fred Coleman found gold at Coleman Creek in 1869

after the civil war.

After that, Drue Bailey was a Confederate soldier who heard about the gold mine.  He then move he moved from Georgia to the Julian area.

He founded and established this small town and named it “Julian” after his cousin, Mike Julian.

Many people came to this town to get rich by mining gold.

Some buildings which built in the 1870’s are still standing today!

Numerous hard rock mines were established in 1879 in the Julian and Banner area.

Unlike many other similar mining camps, Julian survived after those other mines ran out.

But Julian also had a unique climate, rich soil and proximity to San Diego.

So, in the early 1870’s, James Madison brought the first apple trees to Julian.

The cold-winter climate matches the requirements for growing apples.

Julian apples won many blue ribbons at places like the Chicago World’s Fair of 1893,

the St.Louis Fair and the San Francisco World’s of 1915.  So they became popular.

The first Julian Apple celebration was held in 1949.

Continuing into the present, every October the town holds the Julian Apple Days Festival.

Many apple pie shops compete for the best taste

Julian is famous for apples. 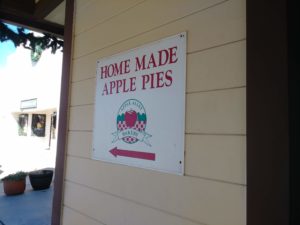 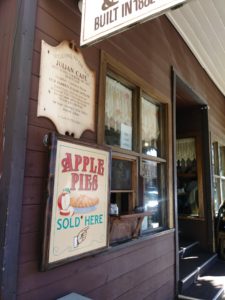 So we could find several apple pie stores on the main street of Julian.

In October, 10,000 apple pies per week are baked in this small town!

What a huge number

I would like to introduce two popular apple pie stores.

You can order apple pie and also sandwiches and other light items as a light meal.

There are many kinds of apple pies in their showcase.

Warm up a little and order whip cream or vanilla ice cream with apple pie is the basic way to eat it.

It was so hard to choose, but I ended up deciding to order crumble apple pie with whip cream!

One piece is so big.

So if you want to taste several pies to compare the taste, it is better to share with someone

This place is famous as well.

We went to this place at lunchtime, and many people were waiting on line!

This place has a small space to sit down and eat.  So most customers were take-out “to go”. 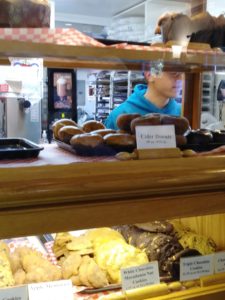 ※Closed on Thanksgiving day and Christmas.

We tasted both pies and they were really nice.

It is difficult to decide which is better, but if anything, I love Mom’s pie.

If you are planning to visit Julian, I will suggest that you should skip breakfast

and taste apple pies instead.

You can try to find your favorite apple pie!

But when you go there, you should arrive before lunchtime

If you go after lunchtime, you will have to wait for a long time to get pie.

Well, as I wrote that Julian was famous for gold mines.

There are places that used to be gold mines.

One of them called Eagle Mine Co. holds a mine tour so we joined it.

There are many old tools and machines which were used at that time.

And a guide explains how they blasted through the rock in dark and narrow tunnels and so on.

At first, guide demonstrated how to wash the sand and find gold. This is call “panning” for gold.

Then we entered a narrow tunnel.

When we entered, we found that the ceiling is low.

My husband’s hight is about 6 feet, and he almost hit his head

I wondered if a tall man used to work in the mines, it would be very hard.

Probably, they bent their body all the time!

There used to be two different mines in this mountain. High Point Mines and Eagle Mine.

The High Point Mine produced more gold than Eagle mine. However, they dug tunnels from

both sides of the hill and then ended up meeting in the middle of the mountain.

But High Point Mine did not own stamp mill.

So they worked together to use this stamp mill.

These big machines pulverized the stones and then separated out the particles of gold.

At the peak period, these machines were tremendously noisy for the whole day.

This would be a few million dollars in today’s money!

What a huge money!

I think many people who had big dreams to make a fortune came to Julian.

This time we stayed at  “Orchard Hill Country Inn” in Julian.

I love this hotel and this place made me relaxed and satisfied.

There are just 22 rooms.

An somewhat old structure, but very well maintained.  It was a comfortable place and most of the guests were over 60.

Our room was so compact and cute.  Just like a mountainside cottage.

Although the atmosphere was comfortable, dinner and breakfast were wonderful.

They serve dinner only on Friday, so we stayed on Friday night.

Actually, I did not have high expectations for this hotel.  But the food was so nice, the service was friendly

and also the owners were very cordial.

Especially the fluffy scrambled egg with cheese, the homemade Strudel were all so tasty! 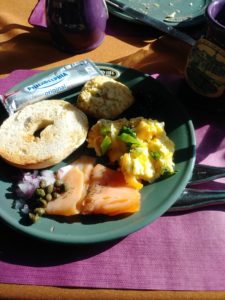 Well, I wrote about a small town of Julian which we can stopped by on the way to San Diego.

I think that you can enjoy Julian in one day which is enough time.