A baseball game at Dodger Stadium!

Well, Dodgers are doing a good job this season.

The best won-lost percentage in the major league so far, this season.

My husband is a big fan of the Dodgers team and he said, “Let’s go to the Dodger Stadium to

I forgot when was the last time that I went to a baseball stadium. Probably, more than twenty years

ago in Japan, I think. 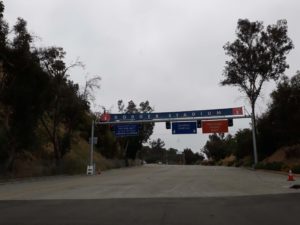 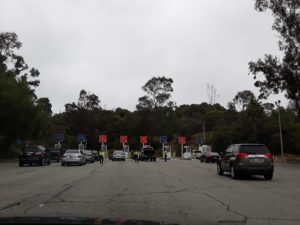 The history of Dodger Stadium

It was constructed in 1959 and it took less than three years at a cost of $23 million.

It is on the hill from which you can see Downtown LA.

Also, this stadium is famous for the third oldest baseball stadium in the US.

By the way, the oldest stadium is Fenway Park in Boston and the second one is Wrigley Field in Chicago.

Also, it held some concerts such as The Beatles, U2 and Mickael Jackson.

Actually, in the mid-1950s, the Dodgers team used to be in Brooklyn, New York City.

The team president, Walter O’Malley, tried to build a domed stadium in New York, but the city

his offer to build a stadium.

At Dodger Stadium there are 21 terraced entrances on the six different seating levels.

First, the entrance with a security check.

There are 56,000 seats from field seats to top deck seats. 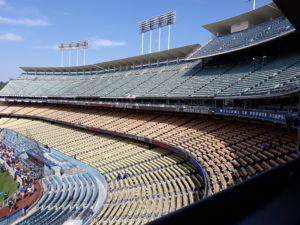 There is parking for 16,000 cars and each section seating has parking immediately adjacent to an entrance. 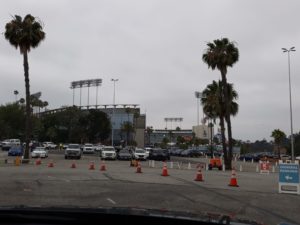 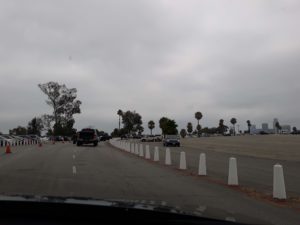 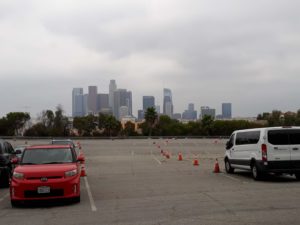 There are many souvenir shops and food vendors on each level. 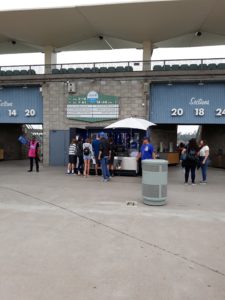 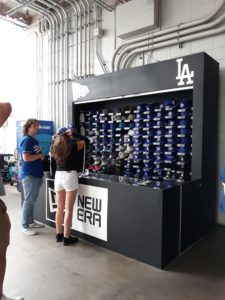 Our seats were in field-level seating and at the 15th row on the first base side.

I felt closer to players than the stadium in Japan 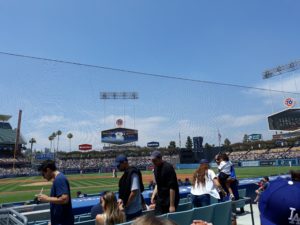 We could see the bullpen after a short walk from our seats.

It was so impressive!

Before the game started, the US Women soccer team got the first prize in the World Cup.

Everyone was excited at the news.

By the way, the Dodgers game on this day did not have good results for the team.

In the first inning, the Padres team, from San Diego, hit a home run

Unfortunately, the result was 5 – 3 and the Dodgers lost the game.

During the game, the Dodgers fans were so excited and made the “Wave”.

These things are an American tradition and I love to do that.

Food and drink in the stadium

Well, the typical food and drink while watching a baseball game is hot dog and beer, I think.

One very popular food in the stadium is the Dodger Dog.

Many people buy this. 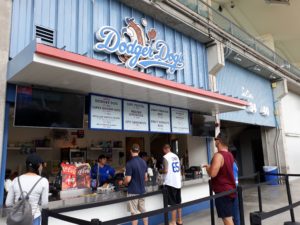 However, my husband loves to buy another hot dog called the Kosher Hot Dog.

Kosher means made the sausage conforms with Jewish rules.

I have not compared it with the Dodger dog so I do not know exactly how the taste is different,

but it was really good. 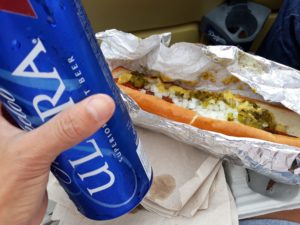 The Kosher dog shop is on the field level and you are facing the field.

So it is on the far right side. 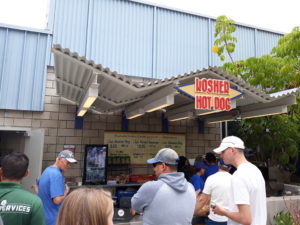 If you are interested in this hot dog, why don’t you taste it!

It was a hot day so I drank a can of beer and also one draft beer!

It was so tasty

About the V.I.P room！

After the game, when we were returning to the parking lot, we found V.I.P rooms! 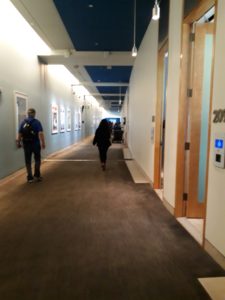 The staff was cleaning room then he said, “If you want to see the room, come on in!”

So we entered one of the rooms.

It was a room which had seats in the front facing the field and the capacity for about 20 people.

There was a bar in the back of the room and seats were on the outside. 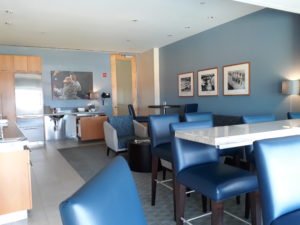 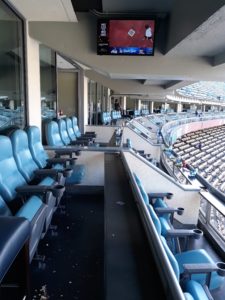 There was a menu from which you can order directly to the room.

I was so curious about the menus.

It was typical American food such as a salad, chicken wings and so on. 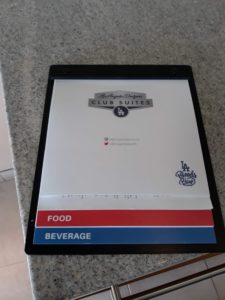 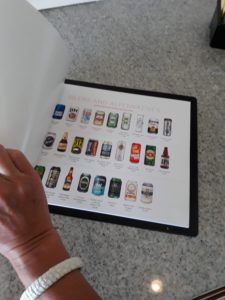 I thought it was normal prices.

However, rich people can rent these kinds of rooms and watch the game with a relaxing lounge

If you have money, why don’ t you rent this gorgeous room and invite all your friends！

There are many web sites to get tickets, but I prefer to access the Dodgers web site to buy the ticket.

The price depends on the date and category of seats.

How to get to the stadium

・Exit to Dodgers Stadium from the 110 Freeway and the stadium is close to the exit.

③ By taxi or UBER

・I do not suggest going on a taxi or UBER. That is because the price is changeable and depends on the traffic.

And it is difficult to find UBER after the game.

Precautions for watching day game in the summer season

In the summer season, the temperature and sunshine are strong in Los Angeles so

I suggest bringing with you

I think in Dodgers stadium you can feel like an American, even if you do not really like to watch

If you visit Los Angeles, how about watching a baseball game at Dodgers Stadium?